I purchased my 2014 Toyota Tacoma TRD Off-Road with a tonneau cover on the bed of the truck. Knowing that I would be using this truck as an overloading vehicle, and doing lots of camping, I decided to go the route of adding a cap and building a sleeping platform in the back. This has quite a few benefits. For one, there really is no setup required for camping. Just hope in the back and go to sleep. Second, the platform allows for me to store items below and make optimum use of the space.

Here’s my truck with the tonneau cover removed. Getting ready to go pick up a Leer cap that I found on Craigslist. 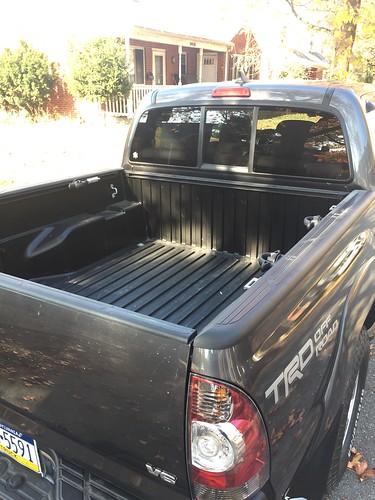 Here’s the Leer cap mounted to the Toyota Tacoma TRD Off-Road. It’s difficult to see in the photo but the cap is green, which does not match my truck. But I bought it for $400 which is a huge savings over paying around $2,800 for a new A.R.E. cap which I was pricing. 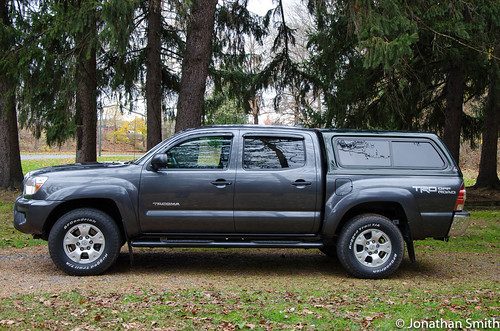 $300 later, and a big thank you to my local Maaco garage and I have a color matched Leer cap on my truck. What I don’t have at this point is any lighting in the cap. 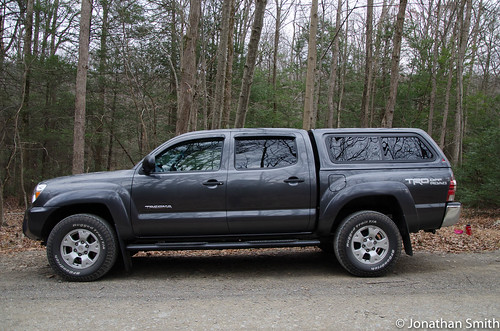 There is no constant power at the back of the Tacoma. Since I would be using the bed for camping, I needed to have light without having the keys in the ignition. And I needed to run power to the 3rd brake light on the Leer cap. My buddy Tom helped me run power wire from the battery through wiring loom, along the frame, and into the rear taillight housing. I drilled a hole through the bed liner and inserted rubber grommets to protect the wire from the edges. We spliced into the rear taillight wire to control the 3rd brake light, then split off the power wire so that I can run power to the interior dome light, and also to power the LED lights that I mounted to the interior of the cap. I also ran a ground wire from a bolt under the bed, and used that to ground the LEDs, the dome light, and the 3rd brake light. 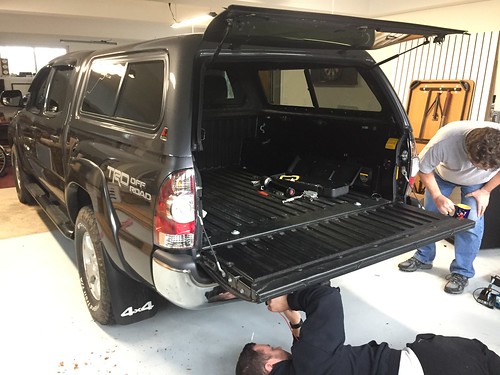 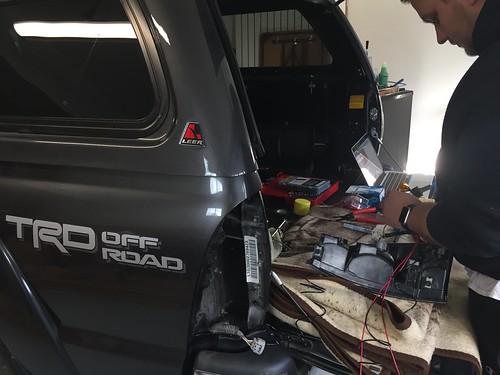 I added a 6-pin wiring connector to make connecting and disconnecting the wires a breeze in the event that I need to remove the Leer cap. I also drilled another hole in the bed liner and mounted a rocker switch with blue LED that controls the interior mounted LEDs in the cap. 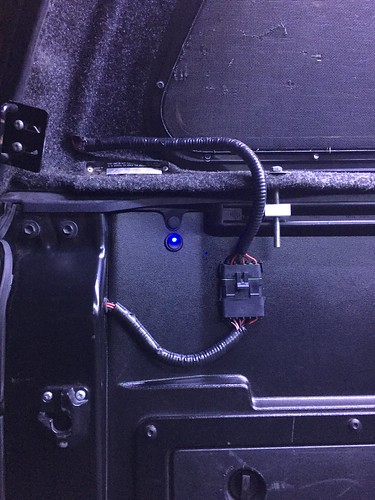 The LEDs came in a 16-foot long strip but can be cut every 3 inches. I cut the LED strip into 3 sections, one on both sides of the cap, and a smaller section that mounts near the cab. My buddy Tom and Andrew worked their magic soldering the LED strips together and applying shrink wrap to protect the connections. Then I applied some 3M double-sided tape to the strips and pressed them firmly against the carpeted interior of the Leer cap. 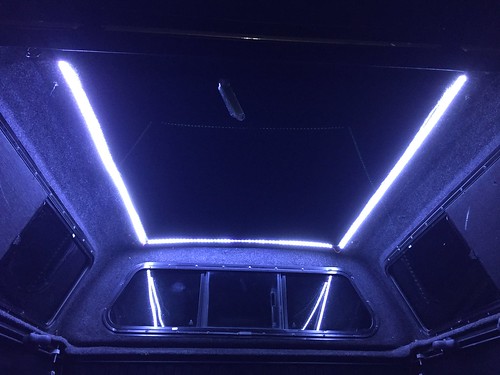 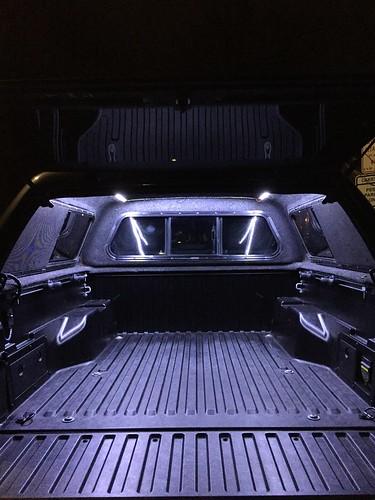 Now that the lighting is done, it’s time to move on to building a sleeping platform. There are a ton of ideas out there for ways to do this. Some people build some pretty amazing setups with sliding drawers, hinged compartments, and more. I decided to not over think this and simply get something built that is simple and inexpensive. 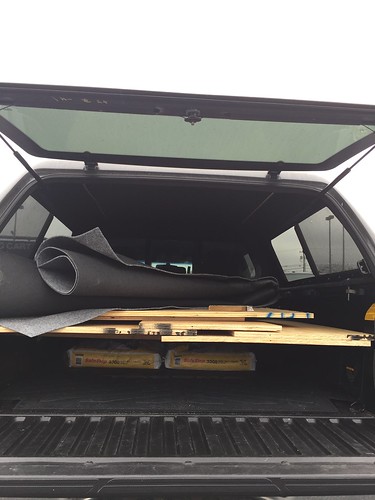 I had Lowes cut the plywood so it would fit exactly the length of my bed with the tailgate up, and half the width of the bed. It kinda sucked that I had to buy two sheets of plywood, but that’s how the math worked out. I’m sure I’ll find a use for that extra plywood in the future.

Here I’m using cardboard to make a template for the rear corners of the plywood. The bed isn’t square as it has an angle near the tailgate that I need to cut out so that the boards fit flush. I did this the old-school way with a hand saw. Simple and convenient. 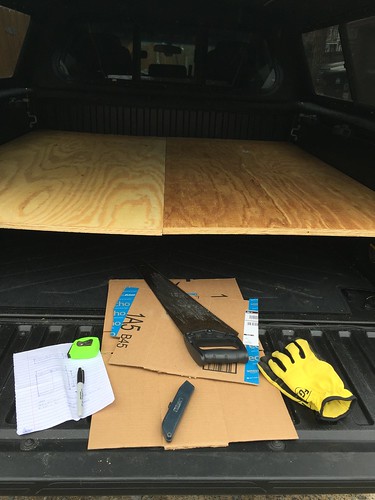 I then played the outdoor carpet down, sprayed it with 3M spray adhesive, and positioned the board in place, folding up the edges and stapling on the under-side. This took some cutting and folding to get things right.

Half of the sleeping platform is in place. 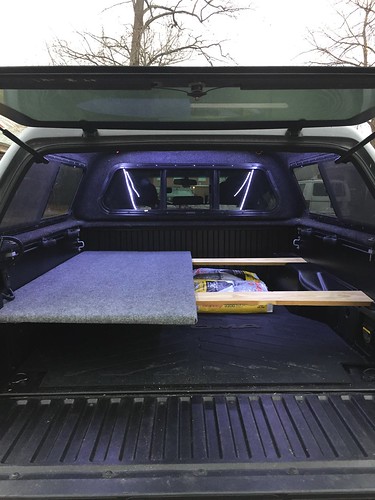 Here both pieces of carpeted plywood form a sturdy sleeping platform and provide plenty of space to store other supplies underneath. 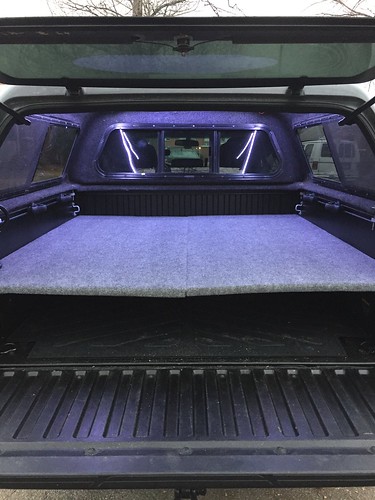 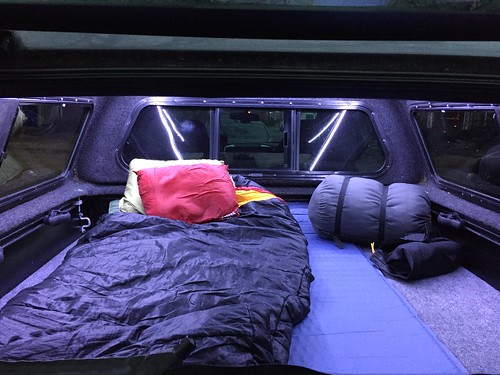 My best friend, Terry the Pup approves and is looking forward to some camping adventures in the Toyota Tacoma! 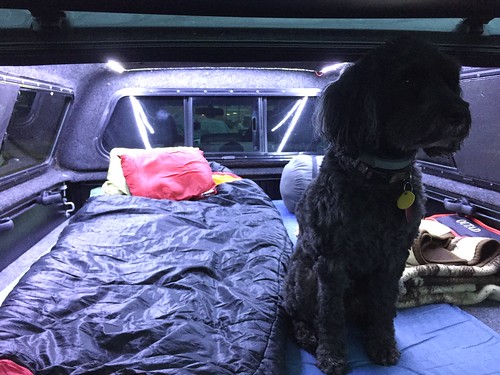 The main reason why I sold my motorcycle and traded in my car on this Toyota Tacoma is because I want to be able to travel anywhere, in any weather, and camp out of my vehicle. There are a few options when it comes to camping out of a truck. The roof top tent (RTT) is the “cool” option, but requires time to set up and tear down as the tent is attached to your truck. The trailer, which is also cool, but I have no place to store a trailer at my home, and I’m not a fan of maneuvering with such a device attached to my vehicle. And finally, sleeping in the bed of the truck under a cap. This is the route I’m going because it’s the most affordable in my case and requires no setup. The downside? I have a short bed Tacoma that is only about 5′ long. Good thing I’m short.

I was lucky enough to find a great deal on this Leer cap. The cap was green, but Maaco hooked it up with a color match for my truck for a good price. The total cost was still a fraction of what a brand new cap would cost. 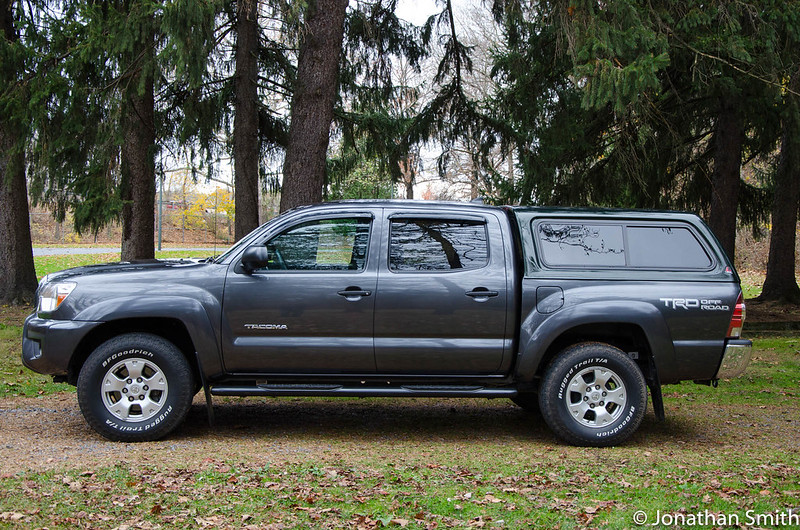 I just recently launched a redesigned website for the Historic Harrisburg Association, a non-profit organization in Harrisburg, Pennsylvania. The redesign and launch solved many issues. The most important issue the website redesign solved was the fact that the previous content management system was not maintained and eventually lost functionality which brought the website down. The new Historic Harrisburg Association website is built on the WordPress content management system with the following features:

In addition to redesigning the website, I am also maintaining the website by monitoring the content management system and plugins for updates and security issues along with managing cloud-based backups.

If you have a similar project, contact me and let’s work together!