On November 24, 2016 by Jonathan Smith With 0 Comments - Overland, Writings

Since I will be building a sleeping platform in the bed of the Toyota Tacoma, I need to dust proof it. I realized how much dust gets into the bed of the truck pretty quickly by driving many miles of dirt roads with the tonneau cover attached. One look inside and everything was covered in dust. The tailgate seal I used below is the Ultimate Tailgate Seal available on Amazon.

There are three drain holes near the cab side of the bed. These are great to have if you have water in the bed of the truck. But my bed will be covered. So these need covered to keep dust and moisture out of the bed.

Black duct tape to the rescue! Simple, inexpensive, and should work.

The right side storage compartment in the bed of the Tacoma has drain holes in the back and large holes for the hinge of the cover. This allows too much dust into the bed.

I covered the drain holes with black dust tape. The hinge holes are covered with insulated adhesive which I sliced with a knife to allow the hinge part of the cover to pass through.

Getting ready to apply the tailgate seal to the Toyota Tacoma.

The ultimate tailgate seal applied around the edges of the Toyota Tacoma tailgate to keep dust and moisture out.

Since attending the 2016 Overland Expo East event, I became hooked on overlanding culture, sold my motorcycle, and traded my car in on this 2014 Toyota Tacoma TRD Off-Road double cab truck. And so the build begins, as does the journey. 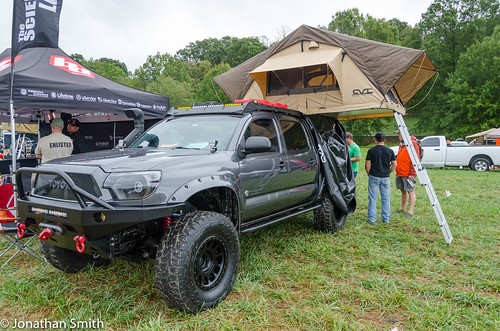 Overlanding is self-reliant overland travel to remote destinations where the journey is the principal goal. Typically, but not exclusively, it is accomplished with mechanized off-road capable transport (from bicycles to trucks) where the principal form of lodging is camping, often lasting for extended lengths of time (months to years) and spanning international boundaries.

While I may not have travelled across international boundaries or at months at a time. I’ve done my share of travel by motorcycle and camped along the way. Little did I know at the time, that what I was doing was overlanding.

As anyone knows, social media is great for, well, being social. It was through Facebook that I had made friends with people who are involved in the Overland community. When I saw a call for volunteers at the Overland Expo East which was the week of my birthday, I jumped at the opportunity. What more could I ask? A road trip from Harrisburg, Pennsylvania to Asheville, North Carolina to attend an awesome event!

At the time I had a 2009 BMW F650GS Twin. The bike was great on the road, and lots of fun on forest roads. I loaded up the bike with my four-season tent, sleeping bag, sleeping pad, clothes, food, camera gear, and camp stove and headed south. The trip was broken up into two days with Roanoke, Virginia as the rest stop. The Blue Ridge Parkway makes for a beautiful route when time is on your side.

Check out my full photo gallery from Overland Expo East 2016 on Flickr.

Arriving at the Biltmore Estate for Overland Expo East, I was greeted with some of the friendliest people I’ve ever met. It quickly felt like family as I set up my camp for the next few days and socialized with my camp neighbors. We dealt with rain, wind, and cold mornings by helping each other with anything that needed done. Big thanks to my camp neighbors who have refrigerators in their vehicles for providing me cold water during those warm first days.

Over the course of the event I was able to see so many amazing vehicles setup for off-road, travel, and independence. It didn’t take long for me to decide to sell my motorcycle and buy a truck. The conversations I had with Toyota Tacoma owners, and the tours they gave me of their vehicles really inspired me. It was clear to me that a Toyota Tacoma would make for a great foundation to build a vehicle that would allow me to travel in any type of weather, with my dog, and live independently on the road. Much more so than the motorcycle.

After arriving home from Overland Expo I received a message from a friend asking if I wanted to sell my motorcycle. Was it a coincidence? Within a week of returning home I sold the BMW motorcycle. And within another week I traded my 2014 Honda Civic EX coupe on a 2014 Toyota Tacoma TRD Off-Road truck. This is the beginning.